Today, computed tomography (CT) is an established method with synchrotron radiation sources to obtain volume information from numerous sample types at micrometer resolution. However, it is a fact that the examination of extended flat microsystems or planar test objects is often unsatisfactory when the sample is considerably larger than the area of interest for examination. The considerable variation in X-ray transmission during a scan often creates artefacts during reconstruction. This limitation was overcome by introducing a new imaging method which now enables calculating three-dimensional representations of flat, widely extended objects. However, to obtain meaningful raw data, the sample and the detector need to be positioned with high precision and stability. This demanding task was solved by employing a positioning system specifically developed for this task.

In a joint project, the ANKA (Angströmquelle Karlsruhe) at the KIT (Karlsruhe Institute for Technology, Germany), the Fraunhofer IZFP (Institute for Non-destructive Testing) Saarbrücken/Dresden, Germany, and the ESRF (European Synchrotron Radiation Facility), Grenoble, France, developed synchrotron laminography [1,2], which allows examining large-surface objects. Examples for such object geometries are found in wind energy or aerospace [3] where the method can be applied to detect damage in the inner structure (e.g. during loading and failure) and manufacturing faults. The instrument has been in operation since 2007 at the synchrotron radiation source ESRF at the imaging beamline ID19. For example, the instrument was able to depict three-dimensionally a leg of a fossilized prehistoric snake without damaging this unique find [4]. With the aid of so-called phase contrast methods it was also possible to successfully examine structures without absorption contrast [5]. At ANKA the new IMAGE beamline will also provide interested users with the same method of analysis.

Maximum Demands on Positioning of Sample and Detector

Using conventional CT it is often not possible to perform reconstruction of volume information of enlarged asymmetrical bodies (such as plates, for example), since the different long radiation paths in the sample prevent reliable measurement of the projection data. In laminography, the sample is scanned under rotation around an axis tilted with respect to the beam direction. The volume data can be reconstructed from the different projection. To this purpose, the sample is positioned between the X-ray source and the detector (Image 1).

Maximum precision and stability are essential during examination to allow subsequent reconstruction of meaningful images. During imaging, positional stability must be ensured for both the detector and the sample. The detector is rather heavy (approximately 100 kg) and not maintained at its center of gravity: the challenge is therefore, to position this load with a straightness of motion of less than 0,1 µrad or 100 nm resp. and a resolution of 50 nm, and eliminating leverage and torque at the same time. When positioning the sample, the angle at which the sample is exposed to the synchrotron X-ray beam should be adjustable. The position of the sample itself should be finely adjustable individually, securely and repeatably. In addition, the entire instrument should be maneuvered easily from the optical path when not in use or during reference measurements.

Practical Solution for a Complex Task

Thanks to the close cooperation of the customers with the engineers and developers from PI (Physik Instrumente, see company text box), this complex task could be solved in a practice-oriented manner. After all, this company has valuable know-how and many years of experience especially in the “Beamline Instrumentation” field of application. The aim of the team of specialists, coordinated by PI miCos, is to develop application-specific solutions that go beyond offering individual components and include system integration as well as the complete instrumentation. This capability has again been demonstrated with the instrument for computed laminography.

In principle, the detector and sample positioning consists of three cooperating systems (Image 2): a Z stage with granite base, a detector stage moveable in three directions, and sample positioning. The latter consist of a six-axis positioning system and a rotation and tilting stage on which the actual sample carrier is held magnetically. The challenges lie in the details, which illustrate the sophistication of this engineering feat.

When designing the Z stage, the large overall weight of 2.5 tons proved to be a challenge as it had to be lifted in parallel and with precision. This was achieved using three-point air bearing. This way the unit can be shifted with a minimum of force and remains stable as soon as the air supply is switched off. Tilting of the granite base can be readjusted. An absolute measuring linear scale allows precise and repeatable alignment to a few micrometers. The entire setup is managed via a controller with positioning display and joystick operation.

The design of the detector stage is equally sophisticated. The overhanging load of the 50 kg heavy detectors must be moved over a range of 850 mm x 300 mm x 500 mm. Here, the absolute deviation must not exceed 100 nanometers and tilting is only tolerated up to +/- 30 µrad. The longitudinal axis of the detector stage was therefore integrated directly into the granite base. Other guarantees for high positioning precision include precisely matched components, for example, the drive via centrally arranged ball screws, needle guidance and a very accurate optical linear encoder. A high transmission ratio in a zero-play drive provides self-locking of the vertical axis.

Now the requirement is for the samples to be positioned just as accurately. This is where the six-axis positioning system comes into operation (Image 3). This SpaceFAB is designed symmetrically, where three legs with a fixed length are each mounted on an XY stage in a ball joint. The platform of the SpaceFAB is mounted to the legs via a cylindrical bearing in each case. The lower stages of the XY combinations are integrated into the granite base via guidings. The samples can thus be positioned with six degrees of freedom. Essential features are the freely selectable pivot point of the parallel-kinematic system and its high stiffness. The linear travel ranges are 150 mm × 150 mm × 50 mm, at 0.2 µm position resolution, ±12.5° tilting is possible for the axial angle, and ±5° for the other directions. Precision is provided by optical linear encoders and the high-precision mechanical components which are driven by a combination of stepper motors and ball screws.

A combined rotation and tilting stage, which supports the actual sample carrier, is mounted on this parallel kinematic. The rotating table enables 360° rotation at only 0.24 µm absolute flatness deviation. The repeatability of sample positioning of the SpaceFab has been specified and measured at less than 0.5 µm following reference measurement. Rotation eccentricity was less than 0.5 µm. This is important so that the various projection angles have the same projected rotation center. At lower accuracy, artefacts would occur during reconstruction. The compact construction height allows shallow tilting angles so that the synchrotron beam does not penetrate through the mechanical elements, thus making projection recording impossible. An optical encoder ring assures high angular resolution. In addition, the angle of the sample to the X-ray beam can be adjusted by up to 45° via the tilt stage at a resolution of 0.001°. This design has a self-locking rack and pinion drive and remains stable during examination.

The actual sample holder, a very thin frame carrier, is also an exemplary piece of technology. It is supported by Teflon cushions and is coupled magnetically. Two linear stages angled at 90° in relation to the rotating axis, which shift the sample holder over 150 mm × 150 mm but do not touch same during operation, serve to center the sample holder. Magnetic retention can be switched on and off, a flexure joint and air cushion provide optimal parallelism.

The study results achievable today with such a synchrotron laminography method can benefit a host of fields, from industry-oriented research (see Image 4 for an example from microelectronics, where the quality of soldering points is crucial) to geology and life sciences. A major contribution is provided by the bespoke positioning solution created by the specialists of the “Beamline Instrumentation”, which can even align large samples and consequently rather high loads with micrometer precision. 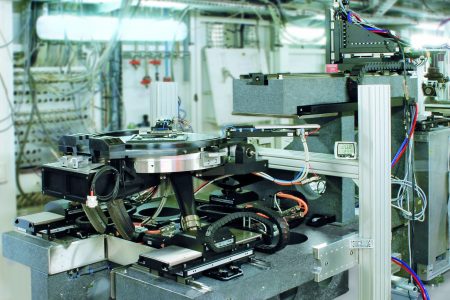 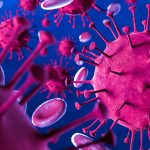 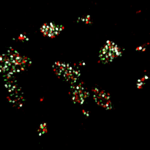 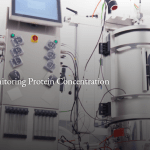